107.9 The End is a radio station in Sacramento.

Justin visits the radio station to play some songs and gets interviewed. 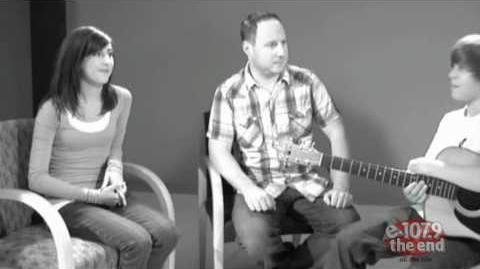 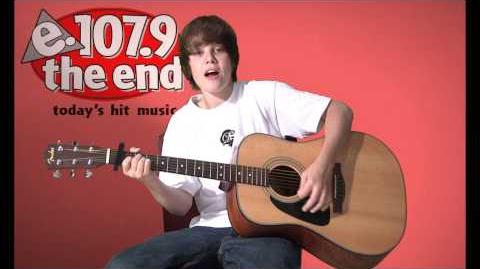 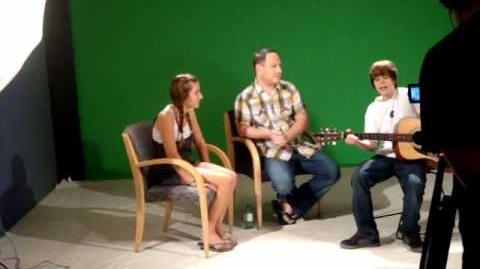 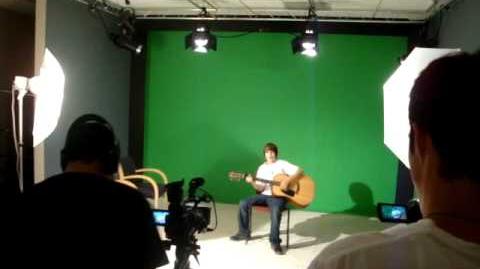 Jason: What are we doing here?

Jason: It's getting weird, yeah. We can do the punch? Do you know the explosion?

Jason: Boom, yeah. I learned that a while ago.

Jason: Justin Bieber here, we had some listenerest stop by and we're going to talk to Justin here…

Jason: You have 42 million people watching your videos?

Justin Bieber: I'm guessing these guys have probably seen it more than once so they count as more, more people.

jason: Who over there has seen a Justin Bieber video? [raises hand]

Jason: Yeah you gotta yell out. Who has seen a Justin Bieber video?

Jason: Alright now come on, one at a time. You in the blue. Come on over here. Uh, some of the people just stopped up here in Sacramento.

Come on, don't worry 'bout the camera. We'll get pictures later, okay. Have a seat with Justin. What's your name?

Jenna: Um, how did you pick up playing guitar?

Justin Bieber: [laughs] She bought me a drumset when I was 4. I would always play (?) so then my mom bought me a guitar just to play around and that was just a really, really crappy guitar.

Jason: Your mom's here, was it because as drums were annoying?

Jason: No, not at all? Okay just thought it would be better with a guitar. Okay.

Justin Bieber: No, so I grab the guitar and I would just play around and my mom's friends would come over every so often and just teach me a couple of chords.

Jason: What was the first song you learned how to play?

Jason: Do you remember?

Jason: Okay, just make it up.

Jason: What do you think it was?

Jason: This was the first song Justin learned how to play. You're going to hear it live.

Justin Bieber: ♪ Sundown in the Paris of the prairies
Wheat kings have all treasures buried
And all you hear are the rusty breezes
Pushing around the weathervane Jesus

Jason: There you go first song (?). Hey thanks for, thanks for coming by.

Jason: Next person come on over here, come on over. The girl taking your picture. What's your name?

Jason: Monica, have a seat real quick with Justin Bieber.

Jason: Here with 107.9 The End. What's your question for Justin?

Monica: What do you do on your downtime?

Jason: Downtime, what do you do?

Jason: Okay, you like taking girls to the movies. If you and her were going out for a movie. What movie do you want to see right now?

Jason: What do you want to see?

Justin Bieber: What do you want to see

Jason: You guys get to go on a date tonight. What movie do you you with him to check.

Monica: I don't know. Whatever…

Jason: Oh you're both. What's out now?

Jason: Ok. You guys should do Harry Potter this weekend.

Monica: Oh that, that yeah.

Jason: Well there you go. Thank you for coming up. Uh let's, let's go. We have another fan here.

Jason: How many? All of them?

Jason: Big fan, yeah? You have a question for him?

Olivia: Yes, who inspired you?

Jason: Who inspired you. Well the answer is me and thank you Justin Bieber.

Justin Bieber: No, thank you.

Justin Bieber: You inspire me.

Jason: No, who is your real inspiration musically?

Justin Bieber: Um, this is so hard to say.

Jason: I write all the Usher's music. How big of an influence is Usher? (?)

Jason: They say young people like 20 and under don't understand the legacy of Michael Jackson. What do you say to that?

Jason: If you had to cover a Michael Jackson song right now, he'd put you on the spot. Which one would you go with?

Justin Bieber: [sings I'll Be There by Michael Jackson]

Jason: Very nice. Put him on the spot. Thank you for coming up, okay. Thank you for being here. And uh you know, you're going to perform a little bit for us? Is that cool? They hear your song.

Jason: How much did usher have to do with your new single "One Time"?

Jason: Cool. Was Usher there when you were recording it?

Jason: Do you feel neglected by Usher a little bit? Do you feel like he should have been there? Or are you glad he wasn't there so you could show him…

Justin Bieber: My heart is broken. [looks at the camera] Usher, can't believe you were there.

Justin Bieber: [fake cries] Not there.

Justin Bieber: No, no no.

Jason: Usher is the greatest.

Justin Bieber: He is the greatest.

Jason: No, hey what Justin thank you for coming on, on this little… I don't know how we call this. We didn't even say. Which we call the segment here.

Justin Bieber: Um this is the…

Jason: And uh Just… I don't know we're not aimed for this thing. You can send comments. Send us comments…

Jason: and tell us how you want us to name the segment…

Jason: Yes subscribe. Justin, you're going to perform a little bit for us?

Jason: "One Time" by Justin Bieber here, 107.9 The End, here in Sacramento

Justin Bieber: [plays One Time on guitar]
Retrieved from "https://justinbieber.fandom.com/wiki/107.9_The_End?oldid=62786"
Community content is available under CC-BY-SA unless otherwise noted.