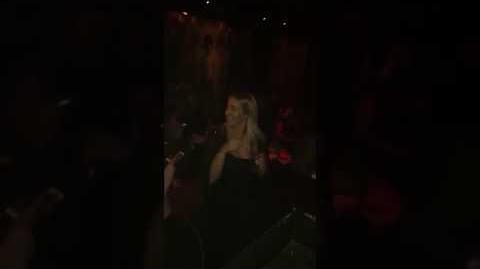 DreLondonEnt "LastNite @djtayjames Gave The Club A Seek Peak Of The Summer Hit I Put Together @postmalone feat @justinbieber - I Tried To Keep It Quiet But It's Too 🔥 🔥 https://www.instagram.com/p/BECc7NHkAcz/" 4:33 PM (Pacific Time (US & Canada))

AlfredoFlores "I hope everyone in Belgium is ready to #BELIEVE! Tonight is going to be insane (if outside the hotel is any indication!) #BEASTMODE" 4:37 PM (Belgium)

BlueyRobinson "Got pranked last night for my last show by @JustinBieber who came out half way through Showgirl and threw peppers at me!! lol" (Italy)

JackieAugustus "Ahhhhh @justinbieber is at the @nycbuyout! Aww yayyyyy :)" 2:22 PM (Eastern Time (US))

RealJayWilliams "Hanging with @Scooterbraun and @Justinbieber tonight to watch him do his thing on Saturday Night Live! It should be hysterical!" 5:56 PM

Z100MoBounce "I'm backstage with @justinbieber during last minute rehearsals for SNL. Ill be on with him tonight :)" 8:06 PM

abadchris "SNL is about to commence! Please tune it to NBC tonight at 11:30pm as @tinafey hosts the show with performances by @justinbieber!" 10:53 PM

scooterbraun "At benihana with the boys. Congrats to Matt Toka. Justin Bieber video in 2 weeks. Asher in less than 10 days. Wild ride with great friends" 10:14 PM (Pacific Time (US & Canada))

Retrieved from "https://justinbieber.fandom.com/wiki/10_April?oldid=138876"
Community content is available under CC-BY-SA unless otherwise noted.