RodneyJerkins "Hey @lindalmusic and @Nasriworld its confirmed our song "As Long As You Love Me" is @Justinbieber next single!!! Lets Go!!!" 1:06 PM (Pacific Time (US))

adambombshow "Cause @justinbieber commanded me to RT @OGGsu4U @adambombshow Why are you giving them away?" 6:44 PM

katyperry "Thanks dewd. I really like that song u played me last night. Game changer! RT@justinbieber: congrats @katyperry on a great movie. proud of u" 7:11 PM

ryandiamondlife "@justinbieber thanks for the jordans big homie 😁" 11:44 PM 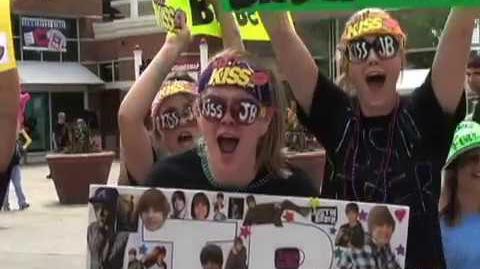 justinbieber "just goes to show that Music is COLOR BLIND!! It is the Universal Language and good music brings us all together...the way it should be" 12:35 PM (Central Time ( US))

justinbieber "Milwaukee Summerfest thank u!! Energy was amazing. Even got in trouble for rockin the segways. haha. Thanks so much to everyone who came" 11:17 PM (Central Time (US))

Justin Bieber "This is from when I was 10 or 11 I think...not sure...but it is pretty funny. Dont know what those dance moves where but I know I will always love the music of Michael Jackson..."Michael Jackson old school...come on!" lol

justinbieber "Taking the weekend off to relax, listen to good music, and get ready to go to San Diego and Los Angeles next week. Back to Canada July 8th" 10:46 PM (Eastern Time (US & Canada))

Retrieved from "https://justinbieber.fandom.com/wiki/27_June?oldid=138364"
Community content is available under CC-BY-SA unless otherwise noted.