↳ scooterbraun "@justinbieber i mean sure but can u at least put some clothes on..this is getting kind of strange. thought we were just gonna watch tv. lol" 2:05 PM

wtfdrxws "I GAVE HIM MY PHONE TWICE HE TOUCHED MY PHONE AND HELd nY HAND AND WINKED AT ME IM FUCKKMG CRUIG HALL HAVE NO IDEA I JUKPKN" 7:19 PM

wtfdrxws "I got to the hotel around 4 and there was a okay amount of people there and I literally was so nervous all day bc I thought it was gonna be—" 10:39 PM

wtfdrxws "—a repeat of what happened in August last year (I flopped and didn't meet him) Anyways, we waited for like 2hrs and they were telling us —" 10:40 PM

wtfdrxws "—Justin was close by and they opened the hotel garage door and then his escalade went inside and they closed it back up. He was in there-" 10:41 PM

wtfdrxws "-for like 5 min and then Hugo and Mikey came out and they were trying to calm us down bc justin was gonna come out and then people started-" 10:41 PM

wtfdrxws "-screaming and stuff & then he came out through a door and he went to the other wide first to meet fans and then he came to my side and he -" 10:44 PM

wtfdrxws "-took pics with us and he grabbed my phone the first time and he had glasses on and he took 2 selfies of us and then he moved up a little -" 10:44 PM

wtfdrxws "-and then came back to me so I casually gave him my phone again and HE ALMOST DROPPED IT HE WAS LIKE STRUGGLING TO HOLD IT I LAUGHED -" 10:45 PM

wtfdrxws "- and he took two more pics of us and That was it omg. I'm honestly so grateful this is my first time ever meeting him I couldn't have -" 10:46 PM

wtfdrxws "OH YEAH OMG HE GOT PUSHED AND HE GOT PISSED AND WENT BACK INSIDE BUT THEN HE CAME BACK OUT" 10:48 PM

KukHarrell "@bjam08 @Justinbieber Just showed this to JB and he thought it was amazing!!! LOL" 6:14 PM 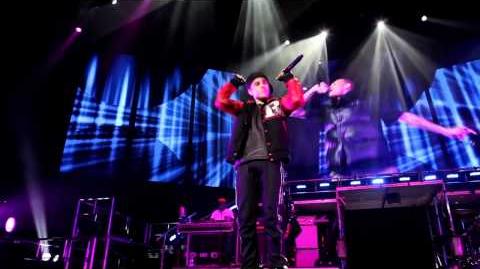 justinbieber "yeah @AlfredoFlores i was #pesst but we know who the true #beast is." 12:53 AM (Brisbana)

Meeting Justin Bieber Part 1
Add a photo to this gallery

Justin Bieber "Made it to New Zealand...the airport was a little nuts last night. Grateful that everyone is excited but not happy that a fan stole my hat and knocked my mom down. If you are a fan just show me the respect that I try to show you. I wouldnt steal your stuff and I wouldnt knock your mama down. I know everyone is excited but I want to be able to sign and take pics and I cant if security has to push me thru because people are getting knocked down. Let's not have anymore shows cancelled. Let's keep it safe for everyone. thanks

ZMonline "We were at the airport last night when @JustinBieber landed... check out the vid of him & the amazing fans!! http://bit.‏ly/abVDsf" 5:14 AM (Auckland)

pollygeegee "@Justinbieber I know where your hat is. The girls just want an autograph and hug for it back!! Polly xxxx" 8:49 AM

TheJayReeve "MTV News and Just Hatched shot thanks to a little help from some Beliebers. Off to ZM to meet @justinbieber!!" 10:59 AM

pollygeegee "On my way to secret @justinbieber meeting location!!!" 11:53 AM

TheJayReeve "Media scrum is crazy at the school for @justinbieber" 12:58 PM

TheJayReeve "@justinbieber just sound checked, no sign of a sore throat, he was sounding killer!!" 1:54 PM

TheJayReeve "I think we should give @justinbieber an Adidas All Blacks jersey, what do you think?" 1:58 PM

TheJayReeve "@justinbieber acoustic set killing it with One Time." 2:47 PM

TheJayReeve "In the @justinbieber motorcade in a 1979 datsun hahaha" 3:18 PM

TheJayReeve "Not long til i interview @justinbieber for MTV NEWS this week!!!!" 5:00 PM

TheJayReeve "@Crystal_Maddox finished the @justinbieber interview at about six thirt he was chill and it's on MTV news this week!" 7:25 PM

TheJayReeve "@KendallMartin2 @justinbieber gave me an autograph for you and Ella. Let's catch up cuzzy!!" 7:38 PM

justinbieber "Sorry...U cant hold me ransom. I got my hat back. no hugs. no thanks u's. just glad they did the right thing. I dont condone thievery!! haha" 10:17 PM

carinmorris "Ready for the HAWKS game tomorrow, my man is in LA with the up and coming JUSTIN BIEBER...watch out world...1st Asher now Justin. so proud!!" 1:14 PM (Pacific Time (US & Canada))

Retrieved from "https://justinbieber.fandom.com/wiki/28_April?oldid=135292"
Community content is available under CC-BY-SA unless otherwise noted.