Scooter Braun listening to “Roller Coaster”
scooterbraun "Jb had me actin like Rodney Jerkins...and I killed it. Haha" via Instagram

justinbieber "Hey ea can u send me NHL14" via Instagram

RodneyJerkins/ "Congrats @justinbieber on another #1 record!!! #Heartbreaker #Chartbreaker" 3:39 AM (Tokyo) 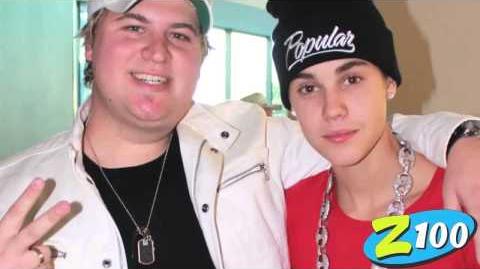 WILD 94.9 "Justin Bieber talks about the most embarrassing thing thats happened to him on tour! Hmm.. I wonder what that could be! http://v.iheart.com/BYdg" 3:30 PM (Pacific TIme (US))

WEKNOWTHEDJ - Season 2, Episode 1 "Someone Thinks They Can DJ??"

Burnham "Who likes "U Smile" by @justinbieber? We do! Great vocals! Great song! Can't wait to be on tour with him starting October 19th!" 1:12 AM (Hawaii)

justinbieber "Just got off of the plane.. NYC baby. I'm gonna sleep like a baby tonight haha. Good night folks" 12:20 AM (Eastern Time (US))

justinbieber "up early...heading to the TODAY SHOW in NYC soon to do an interview and meet some kids. should be fun but sooo tired. blahhhhh. lol" 7:06 AM

justinbieber "ONE TIME and ONE LESS LONELY GIRL. maybe i should have all my songs with the word one in them..lol... http://www.youtube.com/justinbieber" 7:26 AM

justinbieber "Just left the today show reading to the kids. See u guys monday live at the today show. Everybody come! http://twitpic.com/kplgj" 9:34 AM

justinbieber "Going to light the empire state building green for the jumpstart reading. Great cause!" 11:50 AM

justinbieber "MONDAY MORNING everyone come to Rockefeller Plaza in NYC for the TODAY SHOW at 8am--Im performing ONE TIME and ONE LESS LONELY GIRL!!!!" 4:11 PM

justinbieber "this was from the TODAY SHOW this morning. see u guys there monday. bring books to donate!! http://bit.‏ly/Fgtvg" 5:15 PM

justinbieber "please support ONE TIME and ONE LESS LONELY GIRL on ITUNES. get them both TOP TEN and the #1 spot!! sorry britney just chasin my dreams. lol" 5:30 PM

justinbieber "i would like to say goodnight ONE TIME to my ONE LESS LONELY GIRL...where are you?? lol...sorry that was corny as heck. thanks 4 the love" 11:40 PM
Community content is available under CC-BY-SA unless otherwise noted.
Advertisement