Beliebers refer to fanatical devotees of the Canadian pop singer Justin Bieber. Use of the term predates 2009[1], and the existence of the community is a result of the Internet, dating back to Bieber's early YouTube videos. Beliebers are mostly teen girls who have a clear sense of community, but the fandom also includes widely sought after "Boy Beliebers", who are generally loved by their female counterparts due to their rarity. Many beliebers strictly defend and support Bieber and may resort to extreme methods to protect him against anything they deem as a threat, such as issuing death threats to women connected to Bieber, and defacing Wikipedia after he failed to win a Grammy. There are a number of documented celebrity Beliebers.

Bieber fans are called Beliebers. Belieber was one of the best new words of 2010. The Canberra Times defined the word as: "belieber (n) blend of Bieber-believer, a fan of pop star Justin Bieber". Another definition for belieber offered by New York Times "On Language" columnist Ben Zimmer is "belieber: a fanatical devotee of the pop singer Justin Bieber". Usage of the word predates its inclusion in dictionaries.

Love of Bieber by Beliebers has been named "Bieber Fever." Bieber Fever is described as an addiction to Justin Bieber that may start out as a crush on him before escalating over the course to a point where other views the addiction as harmful.

Beliebers have a clear concept of themselves as a community, which Bieber acknowledged on Twitter by using the word, and by claiming one day he could fall in love with one of his fans. "I love all my fans," he declared, "but I've never been in love with one."

The early Bieber fanbase developed on YouTube, and predated the release of Bieber's first album. Fans viewed his videos more than 2 billion times on YouTube, with Bieber becoming the first person to reach that number on the site. He established a personal relationship with them, through Twitter, and answering questions from fans on a radio show.

The fandom has developed several components which co-exist uneasily. One aspect of the fandom can be self-mocking, and is willing to pay a lot money to be part of it. The other part does not like the association with problematic fans and is less willing to buy into the more overtly commercial parts of the fan community, such as purchasing concert tickets. The community sometimes has issues and rival factions inside fandom have been known to attack one another. In one case, a Twitter account shared "alleged direct messages from Justin scolding the authors of [a] blog for writing lies about him." Despite these issues, being a fan of Belieber provides fans with access to a community that may help them through tough times, and is over 67 million strong.

Most of Bieber's fanbase was composed of young girls in their teens, but later when he released Where Are Ü Now and his album Purpose he gained the older people. His fans have been described as patient and doting by the Toronto Star. Bieber fandom offers its female fans "a way not only to subliminate romantic and sexual yearnings but to carve out subversive versions of heterosexuality." Inside the fandom, Bieber is almost always viewed by fans as 100% heterosexual. Some of his fans have expressed an interest in having sex with him, and there are documented cases of fans asking the media to pass along messages to Bieber suggesting this. There was a situation in the fandom where a fan tried gain access to Bieber for this reason by claiming she was Bieber's personal stripper. Fans will also express their love of Bieber by sending him messages on social networking sites like Twitter. Fans may have shrines dedicated to Bieber in their bedroom. X-Factor contestant Drew Ryniewicz was described as being a "true" Belieber for having such a shrine. Belieber's mostly had a positive response when Bieber got a short haircut.

Bieber's popularity is a result of the Internet, with a large segment of the fan community actively continuing to use it to communicate with their fellow fans. Bieber fans utilise online social networks as a way of not just connecting with Bieber and Bieber related information but as a way to interact with other like minded fans. One of the most coveted things for Beliebers online is a return follow from @justinbieber on Twitter. This has been described as the fandom's holy grail. When Bieber announced he was taking a break from Twitter, his fans tweeted supportive messages to him. Twitter changed their algorithm to remove persistently trending topics from the list, including Bieber. His Twitter followers responded by trying to circumvent the changes through the use of misspellings of his name.

Bieber's popularity is a result of the Internet, with a large segment of the fan community actively continuing to use it to communicate with their fellow fans. Bieber fans utilise online social networks as a way of not just connecting with Bieber and Bieber related information but as a way to interact with other like minded fans. One of the most coveted things for Beliebers online is a return follow from @justinbieber on Twitter. This has been described as the fandom's holy grail. When Bieber announced he was taking a break from Twitter, his fans tweeted supportive messages to him. Twitter changed their algorithm to remove persistently trending topics from the list, including Bieber. His Twitter followers responded by trying to circumvent the changes through the use of misspellings of his name.

Beliebers try to get Bieber's attention, and often defend him. I Don't Know How She Does It has a character portrayed by Olivia Munn saying that Bieber's birth to a teenage mother was a "billion-dollar mistake." Fans attacked Munn for this line. After Esperanza Spalding won a Grammy over Bieber, Beliebers attacked her, and in at least one case, wished for her death. Most of the anti-Spalding activity took place on Twitter and Facebook. Bieber fans vandalised Spalding's page on Wikipedia, inserting statements like "She now has the 2011 Grammy for being the Best New Artist! Even though no one has ever heard of her! Yay!" and "JUSTIN BIEBER DESERVED IT GO DIE IN A HOLE. WHO THE HECK ARE YOU ANYWAY?" into the article about Spalding. They even went so far as to threaten the Grammy judges, with one fan saying "the Grammy judges better watch their backs! A bunch of tween girls are out to get you now!" His fans have also sent death threats to Kim Kardashian.

Celebrity Beliebers include Olivia Munn, Kim Kardashian, Andrea Bargnani, and DeMar DeRozan. and Australian Football players Dane Swan and Daisy Thomas. Low Bi-Anne, who was part of a nationally publicised custody case, was given the opportunity to meet Bieber when he was in the country courteous of the concert organisers.

Cathleen Falsani is a self-acknowledged expert about Bieber, and has written a book about Bieber's Christian faith titled Belieber!: Fame, Faith, and the Heart of Justin Bieber.

Bieber's management team makes an effort to mobilize and coordinate Bieber's fans into taking actions related to Bieber, like skipping school to greet Bieber at the airport.

A contest was run on Twitter which included several celebrities that enabled fans to gain access to behind the scenes footage and purchase tickets to the Bieber movie before others.

Pre-teen Bieber fans sometimes coordinate on social media services to gather at a mall and "buy their entire stock of Bieber paraphernalia to donate to charity." One such buyout was organised by a 13 year old and 14 year old in Indiana.

3 beliebers bought a star and named it 'Justin Drew Bieber', they showed the certificate to their idol during the book signing in London, England. 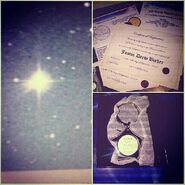 An anti-Bieber prankster submitted copyright violation notices to YouTube, claiming Bieber's official videos were copyright violations. YouTube's policy is to remove material that is reported and then investigate the claims, which resulted in the temporary removal of all of Bieber's official videos from the site. Bieber's Jewish manager Scooter Braun was threatened with death if Bieber performed in Israel.

Just type the year you became a Belieber behind Userboxes/