sirbizzle
Bizzle is Justin Bieber's rap name or nickname that he used from 2013 to 2015.

In early 2013 some fans were already calling him Bizzle after looking up Justin Bieber's name on Gizoogle which resulted into “Quentin Bizzle”. The website lets people translate anything on the internet into “gangsta slang”. [1]

In late 2013, he used to hang around with some rappers, one of them was Maejor Ali who came up with the name Bizzle. Justin Bieber liked the name so much that everyone started calling him like that.[2] The jester is Bizzle's logo and he also got it tattooed. Bizzle was known for his swaggy style, oversized shirts, snapbacks, low pants, and his quiff haircut.

Some Fans loved Bizzle because of his "idgaf" attitude, and even though he was going through an Asshole phase, his love for his Beliebers never changed. Although, because of his attitude a lot of fans stopped supporting him.

Most of Bizzle's music is unreleased, there's the Journals album, his music style was R&B, Hip-Hop and Acoustic stuff, more Bizzle unreleased songs keep on getting leaked each year. Def Jam didn't want him to make R&B music so that is the main reason why he stopped making this type of music.[3][4]

Afterward in 2015 when he released his Purpose album, which was filled with mostly EDM type of music, people started listening to that more which lead him to his first number 1 song with “What Do You Mean”! Since his EDM music was doing really well, he stopped making R&B music, which most of his beliebers and stans preferred. It was then when he made a big comeback and his fanbase started to grow, that's what lead him to stop taking pictures with fans because they didn't care about him, they just wanted a picture with "The Justin Bieber".

Fans asked what happened with Bizzle when they met Justin on May 11, 2015 and he said Bizzle died in a car accident.[5] 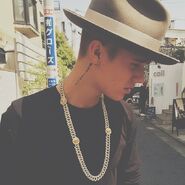 First pic as Bizzle on Shots 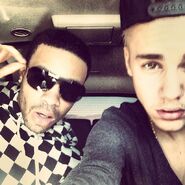 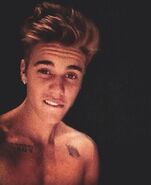 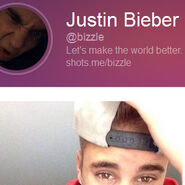