“Boyfriend” is a song by Justin Bieber, released as the first single from his third studio album, Believe. It was written and produced by Mike Posner, Matthew Musto and Mason Levy, with additional writing by Bieber. Bieber explained that the track would surprise people in different ways, since it is a musical departure from his previous material. A snippet of "Boyfriend" was previewed on The Ellen DeGeneres Show on March 1, 2012. The song was announced as a single on the same day, and was released on March 26, 2012. The cover art was released on March 19, 2012.

Musically, "Boyfriend" is a R&B and hip-hop influenced song that features club beats reminiscent of American record producer Pharrell Williams and pop band 'N Sync. The instrumentation is kept in a lower sound to highlight Bieber's vocals. The lyrics of "Boyfriend" features Bieber singing about being "everything you want", and have references to songs by Beyoncé Knowles, Britney Spears and Janet Jackson. The song received generally mixed reviews from contemporary critics, who praised its composition, but dismissed its lyrical content. They also noted that it is too similar to early works by Justin Timberlake.

Mike Posner started working on the song and called it “Inside Of Your Bedroom” with Blackbear on November 29, 2011.[1] Originally they had these lyrics that went, 'Inside of your bedroom, no one has to know. Inside of your bedroom, that's where we should go.'" However, Posner disliked it and then they came up with the title "Boyfriend".

Posner told MTV News that he ran into Bieber's manager Scooter Braun at a LA Clippers game and said he would love to work with the Biebs. [2] When Posner played the song for Justin Bieber, he wrote his own lyrics in the verses.[3]

Justin Bieber performed the song multiple times. For these concerts a dance break was added to the song, which is produced by Bei Maejor.[4]

Rooftop in Los Angeles
The music video was first directed by Colin Tilley. A sneak peak premiered on The Voice on April 17, 2012. Later it was reported that the music video was scrapped and re-shot with Director X on April 21, 2012.

The second version of the video premiered on May 3, 2012 on MTV. Director X summarized the synopsis of the video saying, "it was just cars and the simplicity that they liked. Cars, girls, just young people hanging out, having fun, that kind of thing. When I heard it, I thought that's what it should be."

Director X told MTV: "So we got this rooftop here in L.A., starting our day with Justin and he's pulling up. We got all the cool kids hanging out," X said. "Justin's new look, he's kind of got a James Dean thing going on here. That's really Justin driving that Mustang ... and he did all the stunts by himself, completely. That's all him," X joked. "Actually, that's us holding the car. We put the car on these wheels and we pushed it around in circles while Justin pretended to drive."

Justin's "smooth" driving moves are matched only by the real ones he uses on his female co-star, Rachel Barnes. "We got Justin with the girl, pulling [her] around [with the] kids dancing, 'cause you know how kids do. That's what goes on [at these get-togethers]: Someone brings out their guitar and the party happens," he explained.

"The idea really was to show a lifestyle piece — Justin hanging out — to show that he's older ... just to see this new vibe," the director added. "We get to see that he's growing into his manhood. [We] just [wanted] to get in an environment where we can show that naturally, just have fun and get the vibe of who he is." [5] 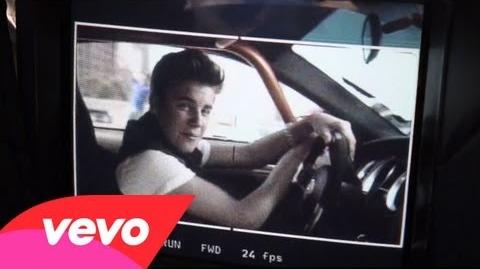 Justin Bieber - Boyfriend (Behind The Scenes) 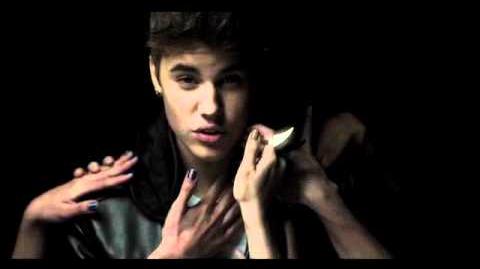 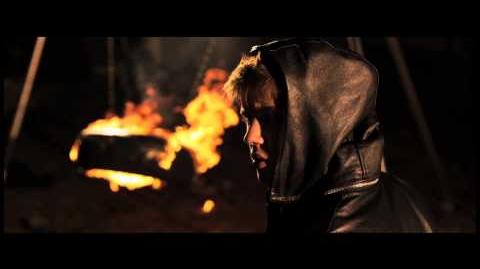 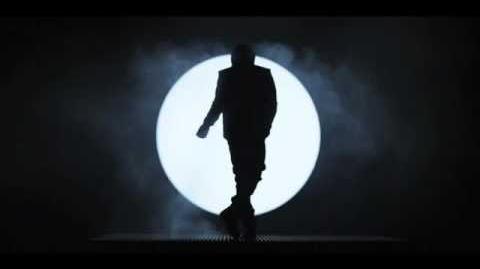 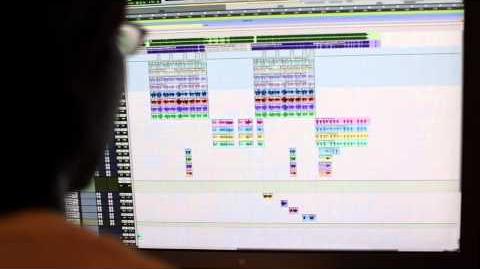 Justin invited his fans to participate in one of the creative decisions for the "Boyfriend" single. Two potential cover arts were published on Bieber's website, and fans were encouraged to vote for which one they preferred. The cover with the most votes became the official cover for the single.

[Verse 1]
If I was your boyfriend, I’d never let you go
I could take you places you ain’t never been before
Baby, take a chance or you’ll never ever know
I got money in my hands that I’d really like to blow
Swag, swag, swag, on you
Chillin’ by the fire while we eatin’ fondue
I know about me but don’t know about you
So say hello to falsetto in three, two, swag

[Verse 2]
Tell me what you like yeah tell me what you don’t
I could be your Buzz Lightyear, fly across the globe
I don’t ever wanna fight yeah, you already know
Imma make you shine bright like you’re laying in the snow
Burr
Girlfriend, girlfriend, you could be my girlfriend
You could be my girlfriend until the w-w-world ends
Make you dance, do a spin and a twirl and
Voice goin’ crazy on this hook like a whirlwind
Swaggie

[Bridge]
So give me a chance, ‘cause you’re all I need girl
Spend a week with your boy I’ll be calling you my girlfriend
If I was your man (If I was your man), I’d never leave you girl
I just wanna love and treat you right

In the 10 Seconds of BOYFRIEND - Full Song out MONDAY March 26th video you can see the original text of Boyfriend.[6]