Jaitlin
Caitlin Beadles is a former girlfriend of Justin Bieber. They dated in 2008/2009 but were not serious.

Caitlin met Justin at church when he moved to Atlanta. They dated for around a year until she broke up with him in 2009 because his career was taking off and she didn't want to be in the spotlight. They briefly got back together later that year when Caitlin had an injury in the summer while jetskiing. They remained good friends after the break up and Justin has become quite close with Caitlin's little brother, Christian Beadles, over the years. Justin talked openly about Caitlin in interviews, and a few of the songs he wrote in his first album and some in his second were about Caitlin including "Never Let You Go". They are still friends to this day and still occasionally hang out 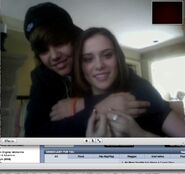 "Justin and Caitlin on a Plane"
Community content is available under CC-BY-SA unless otherwise noted.
Advertisement