Edit
watch 01:36
We're Getting Mutants in the MCU - The Loop
Do you like this video?
Play Sound

Journals (also known as Complete My Journals) is the second compilation album by Justin Bieber, released as a digital download on iTunes on December 23, 2013 by Island Records.

A ten-week digital download campaign entitled Music Mondays, in which one new song was released every Monday night, was held from October 7, 2013 to December 9, 2013. Journals includes five previously unreleased songs in addition to the ten Music Monday releases.

While touring with his Believe Tour throughout 2012 and 2013, Justin Bieber managed to write new songs everyday. According to his manager, Scooter Braun, the writing process had him "writing one to two songs a day for the entire tour and label[ing] them by the city he wrote them in."[1]

In July, Braun gave an interview for MTV News, where he discussed the album, claiming: "For this project, we want to do things a little bit differently. And there are more songs than 10 or 12, so if you have more music and you have more things you want to express, you gotta think out the box, and [think like] ’How do I get this out there in a unique way where it gets directly to my fans and I can express myself through music directly to them?’ And I think that’s what it’s about when you have people who are incredibly creative, things happen."

In October, Scooter Braun gave an interview for Billboard, where he discussed the album, claiming: "Justin had this complete body of work that was very different from the stuff he had done in the past -- very R&B-driven, personal songs, not necessarily songs that he was thinking of as radio records. That's why he called them 'journals.' They're very, very personal to what he's been feeling over the last six months, going through a tough time."[2]

Bieber heard Jason "Poo Bear" Boyd songs and selected them to sing, and many songs from the producer turned into songs off Journals. Boyd continued: "He [Bieber] just felt them so much, so strongly. It was just a matter of me letting go of the fact that I don't care about me being a singer more so than I care about putting great music out into the universe. Then I was able to do it. The songs that I felt like were too mature, we changed them up to fit him like a custom suit."[3]

Braun explained the music mondays: "As each week comes, people will have a different type of song, and understand the different experience he's going through week to week."[2]

Journals was not meant to be physically released, as his record label The Island Def Jam was not happy with Justin Bieber's new sound. The compilation album was released without promotion by the label.

In 2016 it was released as LP by Def Jam. Including the vinyl version for the United States and several countries around the world. And the physical version was only released in Japan. Although over the years, the album was found in some music stores in the rest of the world.

The album cover was made by Justin's friend Maejor Ali.[4] 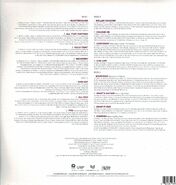