On July 24, 2020, Scooter Braun post on Instagram the new dates of Justin Bieber World Tour 2021 with the caption “new tour!! So... new album?”. Hailey comment: “new albuu6mmm?”, making a pun on the words album and the number 6 (sixth studio album). On September, days before the Holy release, Scooter post a Justin photo with the caption “New era”.

Justin revealed the album and its title "Justice" on instagram on February 26, 2021. Weeks later the official tracklist.

The album contains 16 tracks, and the artists featured on the project are Khalid, BEAM, Burna Boy, Dominic Fike, Daniel Caesar, The Kid Laroi, Benny Blanco and Chance the Rapper. In the US, there are three bonus tracks, Red Eye from Justin Bieber's Official Store, Angels Speak from Target and Hailey from Walmart. Other countries have the three tracks on three separate alternate covers.[3] Accidentally Walmart on his web site, leaks the number of songs and the features artist.

Ryan Tedder of One Republic, a well-known songwriter, also mentioned that he was a part of the writing process for the album.

After its release, Justice has reached 129 #1's on Apple Music around the world.

Justice received 48 million streams in its first day on Spotify and the single Peaches debuted as the number 1 song in America and worldwide.

With Justice, Justin extends his very own record as he become the youngest artist to have 8 #1 albums on Billboard 200. 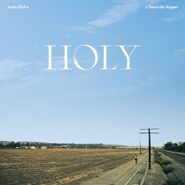 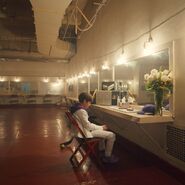 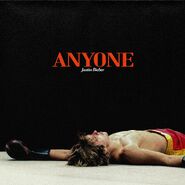 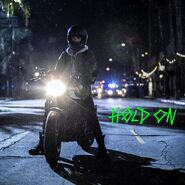 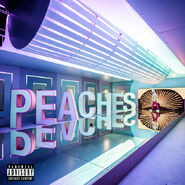 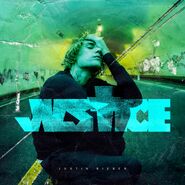 On February 26, 2021 Justin Bieber revealed the album cover and title on his social medias with this caption:

JUSTICE the album March 19th. In a time when there’s so much wrong with this broken planet we all crave healing and justice for humanity. In creating this album my goal is to make music that will provide comfort, to make songs that people can relate to and connect to so they feel less alone. Suffering, injustice and pain can leave people feeling helpless. Music is a great way of reminding each other that we aren’t alone. Music can be a way to relate to one another and connect with one another. I know that I cannot simply solve injustice by making music but I do know that if we all do our part by using our gifts to serve this planet and each other that we are that much closer to being united. This is me doing a small part. My part. I want to continue the conversation of what justice looks like so we can continue to heal. - Justin Bieber

Justice album cover photo was taken in the 2nd street tunnel in Los Angeles, California on January 14, 2021, photo taken by Rory Kramer, after a text message from Allison Kaye proposing the job. On the cover, Justin is seen crouching holding his head with his left hand. You can also see the name "Justin Bieber" in white and the "Justice" logo in light blue, designed by Justin himself; The "T" is a christian cross.

On the cover the color green predominates with a little yellowish green and a little light blue. Justice album cover has a torn paper texture all over the cover.

On February 26, 2021, when the album cover was revealed, the team of the French group Justice reacted to the album logo. According to Pedro Winter, founder and owner of French record label Ed Banger Records, the logo of the album, conceived by Bieber himself, is similar to the logo of Justice, who is signed to the label. On March 1, 2021, Winter reacted on Instagram by taking a screenshot of the logo drawn by Bieber and saying, ironically; "Ed Banger Records appoints Mr Justin Drew Bieber as Art Director. We would like to thank Mr So Me [the current artistic director of Ed Banger] for all his work since 2003". On March 18, Rolling Stone reported that the Justice sent a cease and desist letter to Bieber over the album, citing willful trademark infringement over the Cross logo.[4] 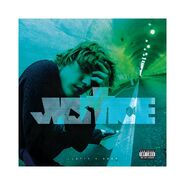 Justice debut No.1 at the Billboard 200 Chart with 154,000 equivalent units and 30,000 pure sales. Becoming the 8th No.1 album for Justin; the first artist under 27 in history to do it. Justin becomes the first Male solo artist to debut No. 1 at the Billboard 200 and Hot 100 thanks to Peaches and Justice. Also Justin debuts No. 1 at Artist 100, Billboard 200, Hot 100, Global 200 and Global excl. US. becoming the only solo artist in history to simultaneously hit the #1 across all 5 Billboard charts at same week. In the second week, with the debut of Justice (Triple Chuck Deluxe), the album fall to the second spot; in the third week, the album jump to the number 1 again, becoming the first Justin album to spend more than a week at the #1 spot since My World 2.0 in 2010.

13 tracks of 16 lands on the Billboard Hot 100 in the debut week, except Lonely and Holy (not charted that week), and the MLK Interlude (because of Billboard's rules). In total 15 of 16 songs charted on the list. Second biggest Justin's tracks for one album with more songs in the list. Purpose (deluxe) tops 17 of 18 songs (except All in It).

Justice debuts No. 1 at the Rolling Stones chart with 108.9k album units and 18.6k album sales. Justin with Justice and Peaches, debuts No. 1 on the RS 100, RS 200 and Artist 500, becomes the first artist to sweep all three charts since Ariana Grande in November, 2020.

Justice debuts No. 1 in different official charts from around the world. The album debuts No. 1 at the Global album top 40 Worldwide chart (mediatraffic), with 277.000 equivalent sales the first week. In China, in 21 minutes of release surpassed 100,000 song unite on QQMusic.

Justice broke the record for the #1 album in most countries in Apple Music history with #129 countries. Beating Ariana Grande's “thank u. next” which reached #100 countries in 2019. Although in August, 2021, the record was broken by Kanye West's “Donda” Exceeding the number of countries achieved by Justice.

Justice spent 67 days at number one on Apple Music worldwide.