Edit
watch 01:36
We're Getting Mutants in the MCU - The Loop
Do you like this video?
Play Sound

The Justice World Tour (formerly the Changes Tour and the Justin Bieber World Tour 2021) is the ongoing fourth concert tour by Justin Bieber, in promotions of his sixth studio album. The tour was set to promote his previous album, Changes, and begin on May 14, 2020, in Seattle, but the tour was postponed amid the ongoing COVID-19 pandemic. Every date was rescheduled twice and the Justice World Tour officially began on February 18, 2022, in San Diego and is set to conclude on March 25, 2023, in Krakow.

During the last quarter of 2019, especially in December, Justin Bieber started teasing his musical comeback via his social media. On December 20, Bieber tweeted that something was going to happen on the December 24, December 31, 2019, as well as on January 3 and 4, 2020. On December 24, he released a video on YouTube where he announced that he would release his fifth album during 2020, on December 31 was released trailer for Justin Bieber: Seasons , first single of His fifth studio album "Yummy" was released on January 3, and on January 13 he announced the first round of dates for his new world tour.

Jaden and Kehlani were originally meant to support the tour as opening acts, but it was announced on Bieber's official website via the touring section that they would no longer be playing on the tour due to new opening act support being added later on.

Justin Bieber will be backed by Canadian Psychedelic Rock band Rhythm Light Orchestra (occasionally known as The Storm) for the upcoming tour.

On March 6, 2020, several stadium dates were downsized to arena dates, with shows moved to arena venues adjacent to the stadiums, which cited "unforeseen circumstances" from Bieber's team.

On April 1, 2020, it was announced that the tour will be postponed amid the ongoing coronavirus pandemic.

And on May 6, 2021, Justin Bieber announced new North American dates presented by T-Mobile and again a new name of the tour. It was renamed "Justice World Tour", following the 6th studio album Justice.

Finally on November 15, 2021, the dates of the rest of the world were announced, including festivals and Jaden, Harry Hudson, TEO and Eddie Benjamin as opening acts of the world tour.

Life is complicated, unpredictable, scary, difficult. But it's also wonderful, exciting, and breathtaking. Sometimes it can be hard, hard to see the wonder and the beauty that's all around me, because I'm so blinded by my problem that's in front of me. Sometimes I'm clouded by fear or shame. Other times I'm clouded by jealousy or insecurity. I've tried to be better, but I keep falling short. I try to be stronger, but there's just those days when I'm weak. I've let go of trying harder and doing better. I trust that God's in control and that He loves me for who I am, and where I am in my life right now. I hold on to Jesus, the sinless one who gave His life so that I can truly live in freedom. You don't have to believe what I believe to belong here. We're all in this together, but if my journey can help you, that's all I want. I love you, people. 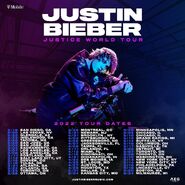 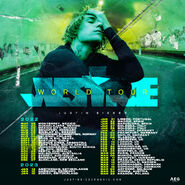 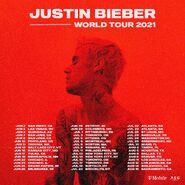 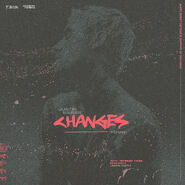