Justin Drew Bieber is a Canadian singer, songwriter, and record producer. Justin was discovered in 2007 by Scooter Braun, who came across his videos on YouTube and later became his manager. Scooter arranged for him to meet with Usher in Atlanta, and Bieber was signed to Raymond Braun Media Group (RBMG), and then to an Island Records (Def Jam Island) recording contract offered by record executive L.A. Reid. Justin has so far released 6 studio albums, 3 Compilation albums, 2 EPs and 3 Remix albums. Justin's fans are called Beliebers. Justin has 8 albums that have debuted at number 1 on the Billboard 200 chart and Justin Bieber has broken a US chart record set by Elvis Presley 59 years ago, by becoming the youngest artist to score seven No 1 albums. Elvis's estate tweeted its congratulations on to Justin on the chart achievement of 21st Century King of Pop. Justin's style of music is mainly pop and R&B, and occasionally dance-pop. He is also a part-time actor, having starred in a few films.

Justin was born on March 1, 1994, in London, Ontario, Canada, at St. Joseph's Hospital and was raised in Stratford, Ontario. He is the only child of Jeremy Bieber and Pattie Mallette. Justin's parents were never married. Pattie raised her son with the help of her mother, Diane, and stepfather, Bruce. His mother is of French-Canadian descent; his paternal great-grandfather was of German ancestry, and his other roots are English and Irish Through Jeremy, Justin has two younger half-siblings, Jazmyn, Bay and Jaxon. Pattie worked a series of low-paying office jobs, raising Justin as a single mother in low-income housing. Justin still maintains contact with his father. In 2007, Justin sang Ne-Yo's "So Sick" at age 12 for a local singing competition in Stratford and was placed third. Pattie posted videos of the performances from the contest on YouTube for their family and friends to see.

Justin had a two-year relationship with childhood friend Caitlin Beadles. He briefly dated singer Jasmine V, before having an on-and-off relationship with American singer and actress Selena Gomez for over seven years. Over the years, he has been romantically linked with various models and singers such as Barbara Palvin, Yovanna Ventura, Chantel Jeffries, Sofia Richie, Jayde Pierce, Jacque Rae, and Kendall Jenner. On September 13, 2018, he married childhood friend and longtime girlfriend, Hailey Bieber, in a courthouse in Los Angeles, California. Justin and Hailey had a more proper wedding in Bluffton, South Carolina, on September 30, 2019. 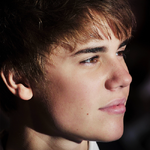 Under right eye
Justin has a scar under his right eye from getting hit by a branch while hiking with his friends. 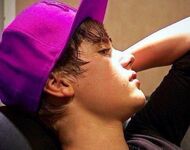 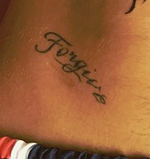