1996–present
Kanye West is an American rapper, songwriter, record producer. He is the founder of the record label GOOD Music and creative content company DONDA. He is one of the most acclaimed musicians of the 21st century, and has attracted both praise and criticism for his work and his controversial, outspoken public persona.

Justin made a song with Rick Rubin and Kanye West for his fourth studio album but he never actually finished his song because of some creative differences. 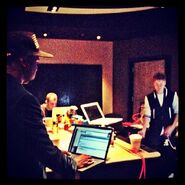 kennyhamilton "Putting the finishing touches on the album and it's gonna be special! @justinbieber and @kanyewest #Believe" via Instagram

Retrieved from "https://justinbieber.fandom.com/wiki/Kanye_West?oldid=159471"
Community content is available under CC-BY-SA unless otherwise noted.