The topic of this page has a wiki of its own: Madison Beer Wikia.

Madison Elle Beer is an American singer. She was first discovered by Justin Bieber after he tweeted a link to her cover of "At Last" on July 17, 2012.

Madison and Justin recorded 4 songs together.[1]

Beginning in early 2012, Beer posted videos on YouTube of her singing covers of popular songs. On July 17, 2012 she gained the attention of pop star Justin Bieber who tweeted a link to her cover of "At Last" to his over 25 million followers. This caused Beer to trend worldwide on Twitter and gain substantial media coverage. Bieber signed Beer personally to the record label he's signed to, Island Records. Madison at that moment was managed by Bieber's manager Scooter Braun.

On September 12, 2013, Beer released her debut single and music video called "Melodies" which features a guest appearance by Justin Bieber and his friend Ryan Butler.

Beer is working on her debut album which she said has an R&B pop vibe. Beer said there will be a mixture of songs by saying, there "will be slow songs, sad songs, happy songs, songs about boys, and songs about being who you are. I'm making sure I'm happy with all of the songs, because if I am not happy with them, I can't expect anyone else to be, you know?" Beer plans to release her album in 2014. She is an avid fan of Justin Bieber and quotes him as an inspiration. In April 2014 she was spotted with Justin Bieber and Selena Gomez in the studio.

In 2016, Madison Beer and Island Records announced they had gone their separate ways, and, Scooter Braun was no longer Madison manager. She signed with First Access Entertainment and released an EP. As She Pleases. In 2019 she announced the deal with a new record label, Epic Records. 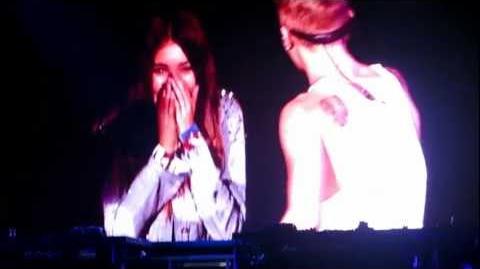