My World is the first album by Justin Bieber. It was released on November 17, 2009, via Island Records, and its follow up, My World 2.0, was released on March 23, 2010. Bieber worked a variety of producers  such as his mentor, Usher, Tricky Stewart, The-Dream, Midi Mafia and more. The songs are mostly inspired by typical coming of age situations, and musically the album is R&B influenced pop.

Scooter Braun's philosophy with Justin Bieber was Michael Jackson. It was, have a young kid with an angelic voice singing great records about love. And everyone told Braun, “You can’t have him sing these records. What does he know about love?”[1]

"There's a lot of stuff that's not just about love. There's songs that teens can relate to, as far as parents not being together and divorce, and just stuff that happens in everyday life. There's a lot of [artists] my age, [and] their whole album [is], 'Everything is perfect.' "Real life isn't perfect, so my album kind of portrays that. You just have to make the best of what you have."

During the summer and fall of 2009, Bieber went on a tour to promote his debut single, visiting several radio stations and performing exclusively. Some of his stops included American Top 40, Z100 and Radio Disney. Internationally, he appeared on the European program The Dome and performed "One Time". His television appearances include appearing several times special guest on YTV's MuchMusic, presenting at the 2009 MTV Video Music Awards and performing on mtvU's VMA tour. He performed "One Time" and "One Less Lonely Girl" on The Next Star's finale, on September 26, 2009. On October 12, 2009, Bieber made his first non-MTV U.S. television appearance when he performed "One Time", "Favorite Girl", and "One Less Lonely Girl" on The Today Show's Toyota Concert Series. Many fans had begun camping out for the concert over thirty-two hours before his performance, and Bieber went to surprise the fans that were already there. The heavily packed concert resulted in high security and barricades nearly being broken down. The crowd for the Today concert was the biggest at the show for the year, including the Miley Cyrus concert. Bieber appeared and performed on The Ellen DeGeneres Show on November 3 and 17, Good Morning America on November 14 and 15, Lopez Tonight on November 17, Chelsea Lately on November 18, It's On with Alexa Chung on November 19, The Wendy Williams Show on November 27, and BET's 106 and Park on December 10, 2009, alongside Rihanna. In addition to the talk show appearances, he appeared on True Jackson, VP, coinciding with the days before the album's release. During Winter 2009, Bieber began another promotion tour in the U.S., and performed at several holiday "Jingle Ball" concerts.

While promoting the album, Bieber was scheduled to appear at Long Island's Roosevelt Fields Mall, but the performance had to be cancelled. TMZ first reported the story, and it was covered by several national media outlets. Over 3,000 screaming fans showed up for the appearance. The event got out of control and over 35 police units from Nassau County and Garden City had to be called in. According to TMZ, a fan screamed that Bieber was in an Abercrombie Kids store, and that is when the mayhem already taking place got further out of hand. Several fans were injured, but no serious injures took place. The police told Bieber he could not come in because of the current situation and fire hazard. In an interview with WBLI 106.1, Bieber stated, "It was so crazy that I couldn't get to even come in the building. They [the authorities] basically threatened to put me in cuffs and send me away to jail." The police arrested an Island Records senior vice-president, James A. Roppo, reportedly for hindering the police's crowd control efforts. Bieber took to Twitter, apologizing to fans, and promising to make up for the cancellation.

Bieber performed for U.S. President Barack Obama and first lady Michelle Obama at the White House for the Christmas in Washington, a televised musical special that benefits the National Children’s Medical Center, which aired on December 20 on TNT Bieber performed Stevie Wonder's "Someday at Christmas" at the program. He was also one of the performers at Dick Clark's New Year's Rockin' Eve with Ryan Seacrest on December 31. While promoting the album in the United Kingdom, Bieber performed an acoustic rendition of "One Time" and a drum solo on BBC's Blue Peter on January 12, 2009. 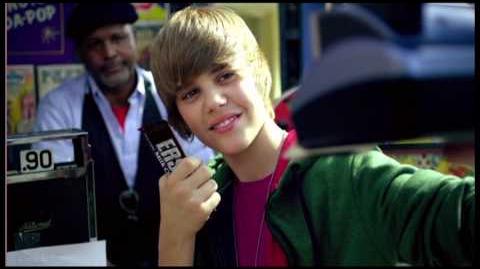 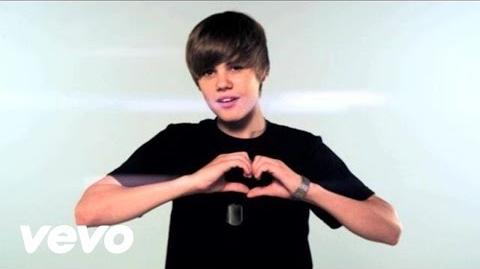 Retrieved from "https://justinbieber.fandom.com/wiki/My_World_(EP)?oldid=130577"
Community content is available under CC-BY-SA unless otherwise noted.