The topic of this page has a wiki of its own: Swiftipedia.

Taylor Swift is an American singer-songwriter, musician and an actress. She is a former friend of Justin Bieber.

Taylor posted a backstage video on YouTube with Justin Bieber's “One Time” playing in the background. As a response Justin dedicated his song “Favorite Girl” to her.

Justin joined her tour Fearless Tour in November 2009 and while singing “One Time” he broke his foot. On August 23, 2011, Justin joined Taylor on her Speak Now Tour to perform “Baby” with her at the Staples Center. Justin pranked her on the hidden camera-practical joke reality television series Punk'd. Justin said in Punk'd that they were going to do a writing session but actually pranked her. At the end Justin still wrote a song called “Cannon Balls”.

In 2013, Justin wrote a song titled “All Bad”, which is a “diss Song” to Taylor Swift.[1] In 2014, Justin and Taylor became rivals after Justin broke up with ex-girlfriend Selena Gomez too many times. On Thursday June 18, 2015, Justin tweeted about how she is great and he also added that he wants to “makes things right with hit the stage together again”, meaning that he wants to be friends with Taylor and perform with her again. 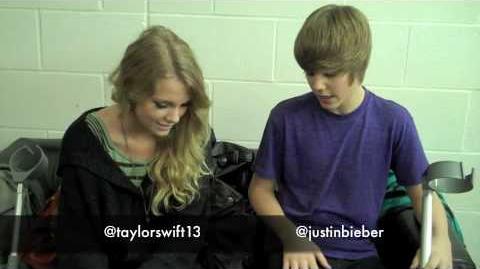 So how did I fracture my Foot with Taylor Swift??
Add a photo to this gallery

Retrieved from "https://justinbieber.fandom.com/wiki/Taylor_Swift?oldid=154965"
Community content is available under CC-BY-SA unless otherwise noted.